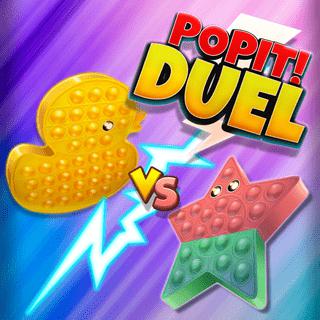 Are you ready to experience Pop It in a completely new and trendy way? If Pop It! 3D wasn't enough of a challenge for you, then you came to the right game! Pop It! Duel reinvents the way how to play Pop It by adding an action packed 1v1 multiplayer mode. The rules of the game are simple: Play against an opponent in a 'Best of 3' match. Whoever manages to pop his Pop It the fastest wins the round. Win two rounds, and you're going to steal your opponent's Pop It and add it to your collection. But watch out! Your opponent will not hesitate to steal your Pop It's as well, so be careful and show off your skills in popping the Pop Its! Grab your favourite Pop It and compete against the toughest enemies worldwide!